Every city or region has its mythic or semi-mythic hero. England has King Arthur and Robin Hood, both who may be based on real people. The Sumerians have Gilgamesh, who appears to have been an ancient king, but not the demigod he is in The Epic of Gilgamesh. Of course, America has legends like Paul Bunyan (Myth), Davy Crocket (real), Pecos Bill (Myth), John Henry (maybe, probably an amalgam of people) and Bigfoot (myth, but I really want to believe).

New York is full of such legends, most of them forgotten. Only the Headless Horsemen remains part of our folklore. But there was one man, one myth, that towered over them all: Mose the Fireboy.

Mose the Myth: Mose the Fireboy (sometimes Mose the Bowery Boy) was the Paul Bunyan of the Bowery, and captain of the gang, The Bowery Boys. He stood over eight feet tall, and broad as a cart. His fists were the size of Virginia Hams, and his arms so long that he could stand upright and still touch his knees (as his sidekick, Syksey, often liked to brag of). With the strength of ten men, he often waded into gang fights not with a knife or brick bat, but with a wagon tongue or an iron lamp post. He was the greatest of the Bowery Boys brawlers, and his exploits with his fire wagon– No 40, Lady Washington Engine, such as rescuing babies inside his massive plug hat, earned him fame through the city. Volunteer firemen were called “fireboys” at the time, hence the moniker.

The tall tales go on. He swam the Hudson in two strokes, and merely leapt over the East River to visit Brooklyn. He drank beer by the drayload, and carried a fifty gallon keg on his belt instead of a canteen. There are no more mulberries on Mulberry Lane, nor cherries on Cherry Hill. Mose was very fond of fruit, and uprooted and ate the bounty from each one.

Mose the Man: According to Luc Sante, author of the book Low Life: Lures and Snares of Old New York, Mose the Fireboy is based off of a real man, Mose Humphreys. Humphreys (sometimes Humphrey) was either a printer for New York Sun or a butcher, but he was most definitely a fireboy for the above company and captain of The Bowery Boys. In 1938, he was bested in a brawl with a rival engine, Number 10, Old Wreath of Roses, and their champion, Hen Renfrau. He later disappeared, though rumored to have opened a pool hall in Honolulu. Not much else is known about him, other than his prodigious size and fierceness in a fight. 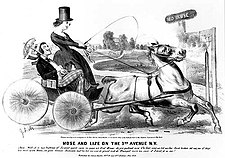 Mose the Character: Not long after Humphrey disappeared, plays about Mose sprouted along the Bowery theaters. The first was 1848’s A Glance at New York, by Benjamin Baker, and more followed. Added to the cast was the roguish Syksey, and Mose’s “g’hal” Liza, a woman that epitomized the Bowery G’hal sterotype.

Mose and Liza in “A Glance at New York”

The man most famous for immortalizing Mose is Edward Judson, better known as Ned Buntline. His early works focused on the Bowery and it’s residents. Mose made a great subject. In 1948, he published Mysteries and Miseries of New York,followed the next year by B’hoys of New York and in 1950, G’hals of New York. The dime novels were quickly adapted for the theater, and became instant hits.

Other writers soon caught on. Mose was written out west, overseas to China, and other ridiculous locations, all with the same plot: Mose comes to town, finds some tyrant there, and saves the day by beating him up. It was the prototype for the modern western, and as predictable as it sounds, it still works today.

Sadly, very few people remember Mose the Fireboy. Buntline is better remembered for his westerns, and the Bowery better remembered for men like Bill Poole (Bill the Butcher from the movie version of Gangs of New York). I say, bring back the Mose stories. Who wouldn’t want to hear about an eight foot giant that carried horse cars for fun and could sail a ship by blowing cigar smoke into its sails.

Let’s see Bigfoot do that!

Like History? Like Fantasy? Check out my latest novel, The Watchmage of Old New York. It’s been compared to everything from The Dresden Files to Gangs of New York to Buffy the Vampire Slayer. Don’t take my word for it (ok, take my word for it), pick it up at Amazon, B&N, Kobo, and/or all the other sites out there. You might even find it in a local bookstore!