Independence Day in New York City is a time for high spirits, popping off the fire plug (at least during my childhood), and fireworks. But In 1857, the holiday turned bloody in one of the largest riots in NYC History. Rival gangs from The Five Points area and The Bowery clashed over two days, with an estimated 1000 participants and thousands of onlookers.

Note: Research for this article comes from: Low Life: Lures and Snares of Old New York, by Luc Sante, Gotham: A History of New York City to 1898, by Burrows and Wallace, The Gangs of New York: And Informal History of the Underworld, by Herbert Asbury, and Walt Whitman’s America: A Cultural Biolgraphy, By David S. Reynolds. Some maps, photos, parenthetical information, and links for further reading come from Wikipedia.

The Bowery, a major avenue in New York that runs through what was once Peter Stuyvesant’s farm, had become a center of entertainment by the 1850s. Beer gardens, salons/saloons, and cheap theaters were the norm. It was the Broadway of the working class, and inhabited by b’hoys–the young roughs of the day–looking for fun and fights. Gangs formed around some taverns, some quite large and powerful such as the Bowery Boys, True Blue Americans, and Atlantic Guards. Fiercely Nativist (anti-immigrant), they often interfered with local elections for the Know-Nothing Party (as the Five Points gangs would do for Democrats). Some of the Bowery Boys would become legendary figures, such as Mose the Fireboy and Bill “the Butcher” Poole.

In contrast, the gangs of nearby Five Points were poverty stricken and mostly Irish immigrants. Their mere presence was an affront to the Nativists, and the gangs frequently clashed. As much for self-defense as for companionship, the immigrants formed gangs. Many had colorful, evocative names such as the Plug Uglies (named for wearing oversized plug hats stuffed with rags as war helmets), the Shirt Tails (who left their shirt tails out of their pants), the Roach Guards (named after a liquor dealer named Ted Roach, not actual roaches) and the most famous of them: the Dead Rabbits.

The Dead Rabbits formed as an offshoot of the Roach Guards. A dispute within the Roach Guards somehow led to a rabbit carcass being flung across the tavern floor. The feuding group took it as a sign, and the Dead Rabbits were formed. That the term “dead rabbit” was a combination of then-current slang (dead=very) and mangled Gaelic (raibead=tough guy) solidified the name. By the time of the riot, the media referred to all gangs in Five Points as “Dead Rabbits.” Though the Roach Guards and Dead Rabbits often fought each other, they just as often allied themselves against the Bowery gangs.

1857 was a difficult time for New York. A scandal involving the election (and possibly bought) position of Street Commissioner led to a battle between the state-run (Republican controlled) Metropolitan Police and the city-run (Democratic controlled) Municipal Police, known as the NYC Police Riot. It became a running battle between the two forces, and actual crime fighting became secondary. The Mets were hated in the immigrant wards (for their mostly “native” membership) and disdained in most of the city, as they represented a state takeover of the city. The streets were chaos, run by gangs, and gang battles became even more common and deadly than before.

The fight between police reached a sad milestone on July 3rd, when Mayor Fernando Wood “disbanded” the Munis (my sources contradict themselves here, with some saying that the Munis weren’t disbanded until the fall. My guess is that Wood made the statement on the 3rd, but nothing became of it until months later.) Regardless, the Mets were now in control, though most were unseasoned, new officers, and far less in numbers than the Munis. That lack of size and experience would show the next day.

On the night of July 4th, a group of Five Points gangs, led by the Dead Rabbits and Plug Uglies, raided a Bowery Boys and Atlantic Guards club house at either 40 or 42 Bowery (sources conflict). It began with a small party of Mets that were attacked by the Five Pointers. One fled to the Bowery club house, and the Five Pointers expanded their attack. The Bowery gangs were able to repel the Five Pointers after fierce fighting. But the Dead Rabbits opened a second front against the Mets on Bayard Street. The Mets were rescued by about 200 members of Bowery gangs (the Mets were mostly Nativist, as opposed to the immigrant-heavy Munis). The police staggered away, and the brawl became gangs vs gangs, with local residents sometimes joining the fray.. The battle raged all night, spreading as far as Pearl and Chatham Steets, and only exhaustion forced a cease fire. At least twelve died that night, though many more are believed dead. Gangs usually dragged away their dead and buried them in cellars. 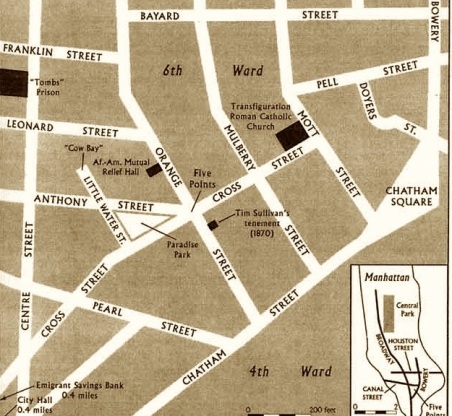 Day 2 of the Dead Rabbits Riot

The riot renewed the next day. This time the Roach Guards joined the other Five Pointers, though both sides were reinforced by gangs across the city. They attacked a Broome Street bar further north on The Bowery. Thousands watched or looted as the gang members hurled bricks and paving stones and attacked each other with knives, iron bars, axe handles, and even pistols.

Like your history with a heavy dose of fantasy? Try my novel The Watchmage of Old New York. It deals specifically with this time period, but with a layer of the supernatural on top. It’s been called “Gangs of New York meets The Dresden Files meets Who Framed Roger Rabbit?” 4.8 Star rating on Amazon!

****End Shameless Plug***
One lone policeman tried to break up the fighting, but was attacked by both sides, beaten, and stripped of his uniform. When he crawled away and reached the local precinct, the Mets again came out in force. They were not able to do much against the mass of raging humanity before them. Allegedly during breaks in the fighting, the women of Five Points taunted their own men into returning to battle.

The police called in Isaiah Rynders, the ward boss of The Sixth Ward (Five Points and part of the Bowery) and political puppet master of the Five Point gangs, to appeal for calm, but he was attacked as well.

Finally, the police called in the New York State militia, as then did a month earlier for the Police Riot. After several more hours, the gangs returned to their homes to care for their wounded and bury their dead.

Sporadic fighting continued for the next few days, even in the German parts of the lower wards, but nothing on the level of the 4th and 5th.  It was a trial by fire for the new police force, and the experience helped solidify them as the true police in New York. In addition, the police began arming themselves with pistols, ten men per ward for the purpose of controlling riots.

The Dead Rabbits resented the way that they were portrayed in the newspapers as looters and thieves. They sent the following letter to The New York Times:

Since all Five Point gangs were being collectively referred to as “Dead Rabbits” at the time, it is possible, though doubtful, that the gang was not involved. It’s more likely that they weren’t involved in the looting, just the brawling.

Walt Whitman, then a newspaper reporter as well as poet, reported on the riot. To Whitman, it represented the anarchy that had infested the Democrats and furthered his distance from his former party. He referred to them as “the Dead Rabbit Democracy.”

1857 considered to be a trial for the Mets. In Autumn, the country suffered a massive recession known as the Great Panic of 1857. Starving, jobless, and homeless, many more riots rolled through the lower wards. It wasn’t until the recession was over that the police were able to regroup into an organized, viable force.