I have lived my entire life in the Hudson Valley, first in the Bronx and then in Rockland County, just across the river from where The Legend of Sleepy Hollow took place. I remember studying it in school, along with the many folk tales of my home. I remember field trips to Sunnyside, Washington Irving’s homestead, and The Old Dutch Church. I know the spot in the woods of Haverstraw where Benedict Arnold passed on the plans to West Point to John Andre. These stories are a part of me, and though they’re legends, the best legends are based in the truth. Enjoy.

Washington Irving’s “The Legend of Sleepy Hollow” is one of the first works of fiction to take hold in American literature. Published in 1820 in Irving’s collection The Sketch Book of Geoffrey Crayon, Gent, it continues a beloved short story, especially in the dark days around Halloween.

Although a work of fiction, Irving steeped his story in the Dutch culture and history of early New York and the Hudson Valley. The hero Ichabod Crane and his beloved, Katrina Van Tassel, were based on real people. The landmarks and history that Irving uses as background are almost all true. But what about the Headless Horseman? Where did he come from, and what is his connection to the American Revolution?

Note: The primary sources for this article–besides the tale itself–is Hudson Valley storyteller Jonathan Kruk’s book Legends and Lore of Sleepy Hollow and the Hudson Valley, HudsonValley.org and Gotham, by Burroughs and Wallace. I also used sources from Wikipedia (not wiki itself) for minor details.

The Legend of Sleepy Hollow

“The Legend of Sleepy Hollow” deals with the bright, but superstitious (and apparently for good reason) teacher Ichabod Crane, a Yankee from Connecticut that travels to Tarrytown, New York, firmly in Knickerbocker territory. He courts his singing student, eighteen year old Katrina Van Tassel, daughter of wealthy land owner Baltus Van Tassel, but he’s not the only one. Local bravo, brute, and prankster Brom Bones also loves Katrina, and he sets a plan into motion to defeat his rival.

Crane refuses to meet with Bones with fistcuffs, so Brom decides to drive Crane away with the ghost stories of the Hudson Valley. The HV is filled with tales of the supernatural, from Spook Rock (there are several Spook Rocks in the area) to the White Lady to Hulda the Witch, who gave her life in battle. Brom taps all these tales one night at the Van Tassel tavern. He encourages the elders there–veterans of the Revolution–to tell horror stories of their battles. This inevitably moves to ghost stories, and the most famous of the tales, The Hessian that had his head blown off and still rides today. It was the Horseman that bashed Farmer Brouwer’s brains, just after he declared “I am a heretical disbeliver in ghosts!” Brom chimed in that he raced the Horseman, who “vanished in a flash of fire” once he crossed the bridge by the Old Dutch Church graveyard. 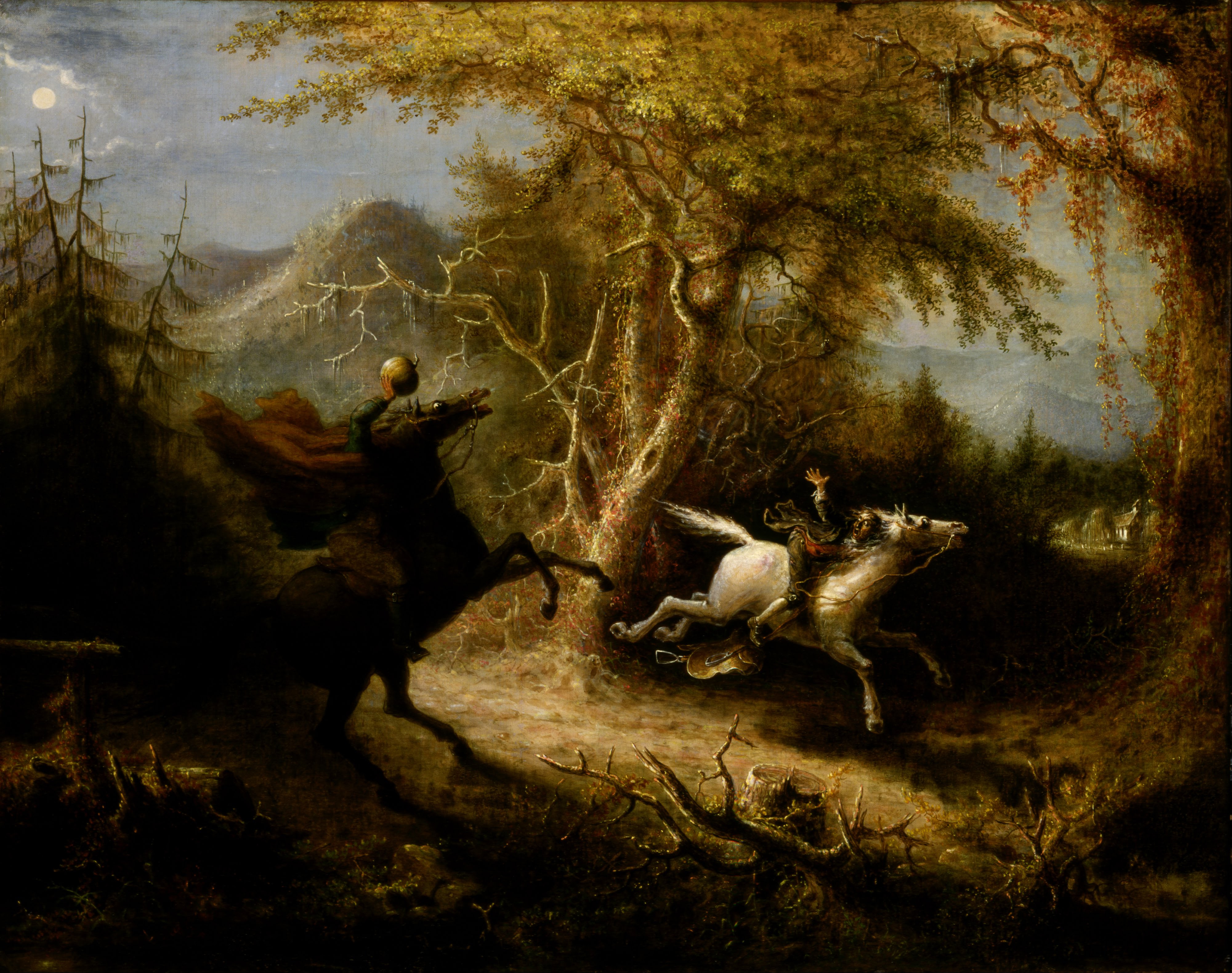 Fear courses through Ichabod, but so did love. Once the tavern had emptied, Crane pledges his love to Katrina, only to be rebuffed. The heartbroken Crane mounts his horse and heads home, though he never made it.

As Crane passes Andre’s Capture Tree, where the ghost of Major John Andre haunts, Crane realizes that he’s being followed by another traveler, one of massive size. Though the rider was cloaked, Crane saw that he was headless. Worse, the horseman’s head rested on his saddle pommel.

Like History? Like Fantasy? Check out my latest novel, The Watchmage of Old New York. It has 4.8 stars on Amazon so far (23 reviews) and has been compared to everything from The Dresden Files to Gangs of New York to Buffy the Vampire Slayer. Don’t take my word for it (ok, take my word for it), pick it up at Amazon, B&N, Kobo, and/or all the other sites out there. You might even find it in a local bookstore.

Crane spurs his horse into a terrible flight. Every shadow and creak seemed to be a ghost reaching out to drag him to the grave. The horseman gains ground, his horse’s hooves pounding the Albany Post Road (Now Route US-9).

Crane remembers Brom’s tale, and races for the Old Dutch Church. Somehow he makes it there before the horseman. He turns around, expecting to see the flash of fire signaling the horseman’s defeat. Instead, he sees the horseman hurling his severed head. It was the last thing that Ichabod Crane ever saw.

The next day, local children found all that was left of their schoolteacher: his horse, his hat, a love poem to Katrina, and what was either pumpkin mash, or Crane’s brains.

Irving implies that the horseman was actually Brom Bones, but leaves this ambiguous. In the story, some joke that Crane was scared away from Tarrytown and moved to the city, but the elders know better. The headless horseman took Crane to the grave that night.

Where the his schoolhouse once stood, you can still hear the ghostly tune of Ichabod Crane.

The Truth Behind the Legend

As mentioned above, Irving placed his tale in the real Tarrytown, with real (or disguised people). Irving wrote the story while in England, and his homesickness lead his imagination back home. The Van Tassels were a prominent family in Tarrytown, and many are buried in the Sleepy Hollow Cemetery, including Catriena Ecker Van Tassel, the namesake of Irving’s Katrina. Elizabeth Van Tassel owned a tavern on Albany Post Road, where the young and wild Irving frequently caroused. Major Andre’s capture tree no longer stands, but there is a monument to where it once was.

As for Ichabod Crane, the name comes from Colonel Ichabod Crane, a career officer that Irving knew. However, Irving notes that his Ichabod was based on a schoolteacher friend.

Where Did The Headless Horseman Come From?

The idea of a headless warrior appears frequently in European stories, the most famous being Gawain and the Green Knight (one could say that Harry Potter’s “Nearly Headless Nick” surpasses this, but I digress). There are many true instances in the Tarrytown area of soldiers being decapitated by cannon fire in the American Revolution. Any one of these forlorn souls could be the real horseman.

A potential source for the horseman came from Revolutionary War hero, prominent New Yorker, former vice-president, and infamous duelist, Aaron Burr. The Irvings were close with the Burr family, and once Burr told Irving a story from his time serving under General Israel Putnam. In this case, the horseman wasn’t a Hessian at all, but an American, Abraham Onderdonck (about as Knickerbocker a name as you can get). Burr said that he was “killed by a cannonball by the enemy, separating his head from his shoulders.” Certainly, this story could have colored Irving’s story, and the idea of a Knickerbocker ghost chasing a New England Yankee would fit the culture of the times.

Another source would be from old veterans telling war tales of The Battle of White Plains.  As Washington retreated from New York in 1776, British, Loyalist, and Hessian troops marched up the East bank of the Hudson to cut Washington off. Just before Halloween, the patriots and Brits clashed at Chatterton’s Hill. The British overwhelmed the patriots and forced them north and across the river, leaving the Lower Hudson Valley a raid-ravaged no-man’s land for the rest of the war.

One of the veterans of the battle, Gen. William Heath, noted in his journal that he witnessed a Hessian artilleryman lose his head on October 31st. What better source for a scary story than that!

Out of Many (Stories) One

So while there is no definitive name behind the headless horseman, the fiction was still based in fact. Any one of the lost soldiers in New York campaign of the American Revolution could be the source, but most likely they all are. Still, if the legend was true, there’s no reason why he couldn’t be galloping up the Albany Post Road on any night, or haunting the Old Dutch Church, which still stands today.

9 thoughts on “Who Was The Headless Horseman?”