Something very unexpected and wonderful happened to me on Saturday. I was at an SCA event called Yule, in the Barony of Bhakail (the Philadelphia area). During court (the period near the end of the event where the current royals give out awards that have been voted on secretly by members of society) I heard my SCA name called…Actually, I didn’t. Like many names, they’re uncommon, from historical times and places rarely spoken. For example, mine is Drustan, the Old Irish version of Tristan (meaning “calamity or tumult,” perfect for this walking disaster.) The herald put the emphasis on the wrong syllable (not unusual because it was the first time he probably saw my name), so I didn’t realize that it was me until Katie took my hand to walk me up and the rest of my friends were all smiles and hugs.

Once I was led up to the Queen (who is an absolutely wonderful person in mundane life as well as in the game) I knelt, and after telling the audience all about the wonderful things that people have noticed me doing, she awarded me what’s called the Award of Arms, or AoA. Basically, the AoA is the first award you receive in the SCA, for contributing in some way to the society, participating, and just making it more enjoyable for everyone. It entitles you to a noble rank, as in “Lord, Lady, or Noble,” (the SCA is very inclusive and recently added a gender-neutral title). I was given a scroll (or a promissory note for one, since the scroll wasn’t done yet) received cheers from the crowd, and walked trembling off the stage into the waiting arms of all of my friends…all of whom knew that this was coming.

I did not. I’ve only been in the SCA for a year and a half. I wasn’t expecting this so soon. Luckily, I like surprises.

It feels good to be recognized, that people have noticed me and said “we like what he’s doing, he makes the society better.” Based on the timing, I’m sure that I got it by impressing everyone with my music and storytelling at Winter Nights (I am interested in the Bardic Arts, big surprise, right?), and not for any fencing skill (since I suck). But I guess people have also noticed me just being kind, and helping out when I can.

I feel seen, and in a modern world where most of us are a shade above invisible, it feels good to be seen.

I love the SCA.

It should be noted, I had a bit to drink (we do a lot of eating and drinking. I think I’ve put on 15 pounds since joining), and I was wearing Christmas lights around my neck, over my tunic (I’ll post a pic). 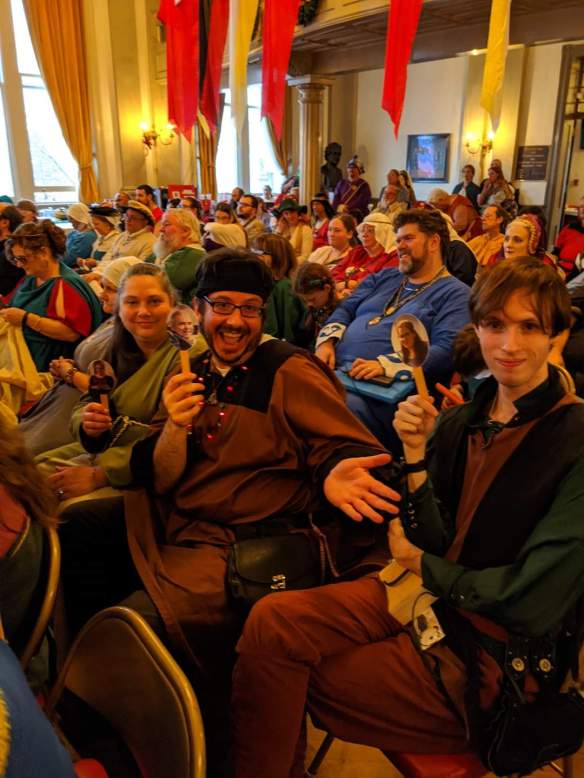