I’m sure that you all know by now that Halloween is my favorite holiday. It’s like Christmas/New Year’s/Fourth of July/Every other holiday rolled into one. But this year, something was missing:

Where have all the trick or treaters gone? I only had six groups, and I live in an apartment complex with lots of young families. There’s no traffic. Everyone is familiar with each other. You can knock on one door and four doors open for you. It’s efficient, a perfect place to snag candy. I ended up with a lot of leftovers, and I didn’t even buy that much (and a few kids grabbed huge handfuls).

Where are you, trick or treaters?

I’m well past the age of trick or treating, and I have no children to take out while wearing one of my awesome costumes. But I still wear a costume when I open the door (usually something scary). I had an awesome spotify playlist going that ranged from hard rock to bluegrass to Disney musicals to punk…literally every genre. I want to participate from the adult side of things. I want to contribute to the fun. But the other side seems to have disappeared.

When I was a kid, I dreamed of being the guy that gave out full sized candy bars. Instead I was stuck with leftovers and sadness.

Also, I got one trick or treater at almost 10pm. Who the F does that?

At least the Nyack parade was awesome. Here’s a pic of the matching costumes that Katie made. She’s amazing: 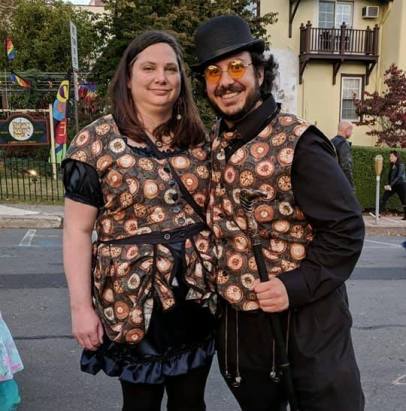 Those pocket watches hanging from my belt? Oh, that’s a waist of time. I can’t wear a costume without some sort of pun. It’s a personal rule.

Next year I’m thinking of wearing a suit, with a bandanna, eye patch, and cutlass. Yes, I’ll be a Corporate Raider 😛

Damn I love Halloween, even without trick or treaters 😀