You may have noticed that the president is using the slogan “America First” just as much as “Make America Great Again.” You probably haven’t thought twice about this. I mean, what American doesn’t want to put America first? We have to take care of our own before others, right?

If words were just words, that’d be fine. but we all know (especially if you’re a writer or reader) that there’s more to words than face value. It’s not just what you say, it’s how you say it (like sarcasm), and what images, symbols, or memories it evokes. There is text, context, and subtext.

Marketers agonize over the right slogans and symbols. You only have to watch a few commercials to see this in action. Remember Puppymonkeybaby? Why did they choose that chimeric combination? Why did they have it dancing around? What were they trying to say about their drink?

Or with campaign slogans, what does “Make America Great Again” make you feel? What about Obama’s “Yes We Can”? Or Reagan’s “Morning in America?” They’re all saying similar things, but they have different subtext. It’s the subtext that appeals to and empowers different people, and that’s why I’m bringing up “America First.” 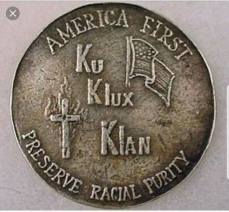 America First was first coined by Woodrow Wilson to stay out of WWI, but it was soon adopted by the Ku Klux Klan and is still one of their favored slogans. Later the America First Committee  and the “Bund” (The German American Bund, the Nazi 5th column in America), used the slogan to 1) keep Jewish, Roma, Gay, Dissenters, Russian (fleeing Stalin), and Italian refugees (fleeing Mussolini) out of America and to 2) keep America from entering WWII. Or as Dr. Seuss said:

And this is where subtext and symbolism come it. To those that don’t know the term’s history, it means nothing. But Trump and his campaign managers used it for a reason. No slogan is a coincidence. Campaign strategists struggle over just the right slogan, the right commercial, the “puppy, monkey, and baby,” as much as any advertising exec.

Why would they choose a KKK and American-Nazi slogan as your own? What is the symbolism? What is the context? Who are they empowering?

Paul Nehlen is running to replace Paul Ryan’s seat in Congress this year. He’s one of the president’s rising stars, often using the term America First to push forward his ideas as he did in this tweet.

Slogans should not be taken at face value. There is meaning below the surface. If I was to say “peace, love, and understanding,” you would think that I’m a hippie. But at face value, they’re just three good things, right?

People that forget the past doom the future.