That’s right, the long-awaited reboot of my award-winning serial, The Watchmage of Old New York, is here! Click here for the Amazon buy site, or buy on Barnes & Noble, iBooks, or Kobo.  Don’t miss out on this, old fans and new will love what I’ve done with the story.

You’ve probably figured this out, but I read a lot. Books, comics, the backs of shampoo bottles, if it has words, I will consume its soul, therefore gaining its powers.

This is a metaphor, but apt.

A few months ago, I wrote about how Inside Out explored human emotions by personifying them. Instead of being something abstract, suddenly Joy was a character, a joyful one, but with significant flaws. Sadness was a pariah, but with a hidden virtue. Anger, Fear, Disgust, all given life. This is how the mind works…

I Don’t Understand. Can Someone Draw Me a Picture?

It’s simple: People need personification. It’s hard to comprehend the “Big Ideas” in Existence, Life, The Universe, and Everything. Who can truly understand Infinity, Evil, or Death? Sure, we may think that we understand, but they’re so large, so incomprehensible, that philosophers, writers, and theologians have been wrapping their brains around them since we first stopped throwing feces at each other (maybe before that).

These are concepts, not tangible things, and most people can’t accept that. They need to understand, but they need to do it in a form they can vibe with. We give them that form. Hence, Sadness becomes a dumpy blue woman, Anger a red volcano voiced by one of the greatest rage-comics of all time. You get the idea.

Neil Gaiman explored this in The Sandman comics. With The Endless, he personified Death, Dream, Destruction, Despair, Delirium (formerly Delight), and Destiny. all aspects of the universe with no form beyond what we give them. I admit, when I think of death, I still picture it as a hot goth girl. 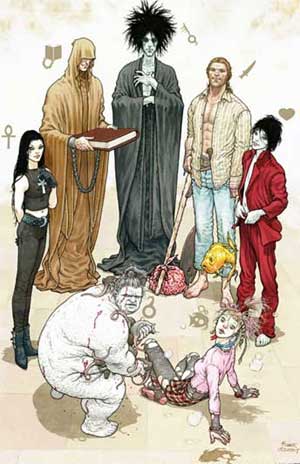 Another example is from The Oatmeal, a comic by Matthew Inman. it’s called The Blerch “a fat little cherub that follows me when I run.” With The Blerch, he personified laziness, always following him, telling him to stop. It gave him something to fight against, which I’ll get into later.

I don’t think I need to go into what things like Santa Claus, Sauron, and Superman represent. You’re all smart enough to read this far, you can figure it out.

Everything in (Pandora’s) Box

This brings us to religions (a touchy subject, one that I wrestle with everyday). If you look at the ancient religions, there’s a deity for everything. They personify love, lust, wisdom, afterlife, leadership, war, etc. The myth’s exist to explain what can’t be explained.

That’s why I mentioned Pandora. The Greeks needed to explain why there was evil in the world, so of course, being a very misogynistic culture, (See: The Story of Medusa), they blamed it on a woman’s curiosity. The Old Testament does the same thing, though they added the snake to personify Evil and the fig as Knowledge.

I get that. I understand the snake and the need to personify evil as Satan . If it’s just an abstract concept, it seems unbeatable. But suddenly evil has a name and a face. You can actively resist Satan, because he’s more real, easier to comprehend. You can say “get behind me, Satan,” and actually put him behind you, something you can’t do when evil is an idea.

I constantly think back to Buffy: TVS in this case. Whenever there was some force doing evil, she’d say something to Giles like “just give me something to hit.” Personification simplifies things. What was bigger than life is now small enough to punch (or stake).

I’m bringing this up because 1) Some assholes just shot up a school for the developmentally challenged and 2) There’s so much of it flying around, but people love to hate.

Oh yes, we love it. It feels so good to give in to the Dark Side (whether they have cookies or not). It warms the heart to imagine crushing your enemies, seeing them driven before you, and hearing the lamentations of their women (please get the reference). People have a hard-on for hate: a “hate-on,” if you will.

This is a problem, and it comes from personification.

Just like how ancient people personified things they didn’t understand as god, modern people personify all of their fears into…other people. We use other people as stand-ins for everything that’s wrong with our lives. I believe the psychological term is Projection. It’s easy: put all of your doubts, fears, and failures into one person-sized bag, hang it off of a hook, and beat it until you feel better.

I don’t want this to become a political post, no matter how much this freaking shooting is drawing me there. I think that you can draw your own conclusions as to how this fits in politics (on all sides).

Maybe here’s a better example: I hate Boston for no better reason that because their sports teams are rivals of my teams. I know that it’s stupid, and rationally I can say “Boston isn’t really that bad,” but I still keep saying things like “The freakin Patriots are what’s wrong with everything in the NFL and the world, and they should all be kicked out!”

See that? It’s stupid and wrong, but it feels so good to hate them and the city they represent..

Just remember, when you say “you people are what’s wrong in the world,” that what you see as “you people” is as much “how you seen them” as “how they are.”

This post went a bit off the tracks at the end, so I’ll leave it here. Everyone have a great day, and don’t let anyone put you in a box…not even a big box with nice wrapping and a bow on top.

1 thought on “Something Bigger Than Life”