I’ve mentioned the blog The Middle Spaces before as my go-to site for intelligent discourse about comics.  I’m sending you a link to a recent post about Carol Danvers (Captain Marvel) which discusses feminist theory, revisionist history, and the little known WASPs of WWII.  I’m including the first few paragraphs below, and then a link.  You should read this.

As I mentioned in my post “Captain Marvel and More Black Iron Man,” in 2012 Carol Danvers, aka Ms. Marvel (sometimes Warbird, once Binary) took up the name Captain Marvel in a new (but now discontinued) series by that name written by Kelly Sue DeConnick—one of the few women currently writing mainstream comics.  While I developed an appreciation of disappointment felt by some fans regarding Monica Rambeau’s loss of the “Captain Marvel” name, I still like the idea of Carol Danvers using the name and think it works in the scope of her military background and source of her powers. 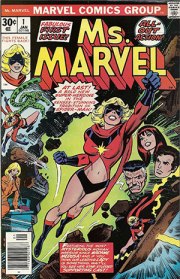 Rereading the first major story arc in DeConnick’s series I also came to appreciate her attempt to write Ms./Captain Marvel into a revisionist feminist text. It struck me as a laudable attempt to make manifest the purported feminist subtext of the character.  The “Ms.” part of her former name alone suggests the kind of Gloria Steinem independence associated with the Second Wave of feminism of the era when the first Ms. Marvel title was published. Of course, being written and drawn by men has undermined this ostensible subtext many times over—starting with her halter-top, sometimes backless, sometime mid-riff showing  costume and reaching its height when she was kidnapped, mind controlled, raped, forced to give birth to her own attacker and then allowed to be carried off again “to be happy” in another dimension with her assailant.  Luckily, that was all undone (kind of).

It bears mentioning that when I use the words “revisionist” or “revisionism” in terms of history, I do not mean this pejoratively in the least bit. History requires revision, not only because of the various social and cultural forces that obscure the achievements of and the crimes against various people of different races, genders, classes, etc… but also to counteract the ridiculous notion that there is a such thing as a monolithic “history,” as opposed to competing stories comprised of the different ways knowledge is created through analysis, research and story-telling.  History needs continual revision because it is not only what is being told, but how it is being told.  Some of the historical events that DeConnick uses in this arc are not necessarily newly revealed (to many), but the way in which she uses them are new.

As I’ve mentioned here before (I think), Valerie used to collect action figures.  Sometimes she would pose them in naughty positions, but hey, who didn’t?  I inherited her action figures, and as a tribute to her, they are all making sweet sweet love down by the metaphorical fire.

She also made this incredible youtube series using her action figures called “Gay Action Figure Theater.”  It’s stars Buffy, Rogue, My Chemical Romance, Pete Wentz, Batman, and Oscar Wilde, among others.  Not only is it brilliantly witty and charming, it does a pretty good job of capturing who Valerie was (especially the rant at the end of part 2).