Goblins are common Veil Dwellers in New York, and they were early settlers in New Amsterdam. There was even one that sailed on the Half Moon with Henry Hudson. They are physically unappealing and their personalities are usually abrasive and sarcastic. They make up for these shortcomings with incredible intelligence and an aptitude for science and technology. Many of the world’s great scientists and inventors were Goblins.

Goblins adapt very well to the mundane world, where their penchant for invention is encouraged rather than stifled. Many prefer it to the other side of the Veil, where Glamour is the norm. Out of all the races, Goblins are the most comfortable in our world. They seem to take pleasure in watching the struggles of humanity.

Goblins are 3 1/2 to 4 feet tall, with skinny bodies, oversized heads, and awkwardly large feet. They tend toward dull green skin, with large yellow eyes and ears similar in shape to a fox’s, but even larger (they take the idiom “I’m all ears” as a mortal insult). Their ears sometimes flop at the tips. Their hands and especially their fingers are long and agile.

Their illusionary guise–like most of the commoner Dwellers–are short. Unlike Gnomes, they are skinny, sometimes frail. They usually have larger ears and intense, bulging eyes. They wear utilitarian clothes and care little about fashion. Hygiene isn’t a priority in either form.

Goblins prefer the company of no one. They like to live alone, and rarely make any interpersonal relationships. They are most at home when working on some project. Even when working on a project with other Goblins, they grumble, knowing that “they could do it better on their own.”

Goblins are easily slighted, but instead of physical confrontation, they plan elaborate tricks to humiliate or harm the offender. They do not get along well with Gnomes.

When Goblins do socialize, they enjoy the company of Trolls and Redcaps, the former for their wicked sense of humor, the latter for their gruff nature. They have little respect for the Sidhe and only pay homage when necessary.

Despite their isolationist nature, Goblins are very important to Dweller society on both sides of the Veil. Only Goblins know how to forge Hallowsteel, the enchanted metal that Dwellers use instead of iron and steel. Without Goblins, Dwellers would be stuck in the Bronze Age.

Illusionary Guise–Like all Dwellers, Goblins can disguise themselves as human. Their appearance is as mentioned above.

Brilliance–Goblins are far more intelligent than other Dwellers and humans. They have exceptional aptitude with science and technology.

Hallowsteel–Only Goblins know how to forge Hallowsteel, the metal that Dwellers use instead of iron. Many have tried to take the secret, all have failed.

Object Summoning–Goblins can summon tools at will. Some can even create tools that don’t exist. This requires a small amount of Glamour for mundane tools, far more for fantastic ones.

Limited Apparation–Goblins can apparate (teleport) short distances, no more than a quarter mile. This requires a very large amount of Glamour, so they rarely use it.

Resistance to Injury–Like all Dwellers, they cannot be hurt by normal means. Only Magic, Glamour, attacks by other Dwellers, and extreme elements harm them. They are particularly resistant to fire, and have a particular attraction to it.

Susceptible to Iron and Salt–Like most Dwellers, pure iron causes grievous injury to them. Even being around iron causes discomfort. Alloys like steel does not have that effect. Salt causes them discomfort, and too much will burn.

Sign up to the mailing list now and get a FREE PDF of my short stories. The link will redirect you to the mailchimp site. Don’t worry, it’s safe.

I love Dungeons & Dragons. I’ve been playing since I was 10 years old (I’m 39 right now), and hopefully I’ll play until I die (or drop to negs). D&D has been a major influence on my writing. Not that I rip them off, but the skills I learned helped with world building, narrative flow, and especially character development.

I enjoy being a PC more than a DM, and I’ve been lucky enough to have some excellent DMs over the years. That said, I love coming up with great scenarios for combat. As one of my DMs said,”it is all about the setting and the dynamic of the landscape.” I agree, but it’s also about customizing monsters (in logical ways) to make them unique and deadly.

In this post, I took some low level monsters–the kind a party would face at 1st to 3rd level–and souped them up. With these changes, they can be deadly to any size party of much higher level. Enjoy.

(some contributions are borrowed from gamer friends John B and Osvaldo O.)

1) Kobolds. Bah, Kobolds are basically xp machines for low level parties. 4 HP, a mediocre AC, reduced damage, there’s not much to intimidate the PCs here. Just kill the rat-dogs and loot the bodies.

Answer: Rogue Levels. Kobolds have two distinct advantages: numbers and dexterity. If you put them to use, they become very deadly. Have them surround the PCs, two kobolds can fit in one 5ft box, so you can get up to 16 (!) in there. Give a few of them a rogue level or even two. They now have Sneak Attack, and since a surrounded PC would be flanked, they always get that damage bonus. Their numbers will make casting difficult (taking out area-affect spells), and 2nd level rogues get Evasion. Imagine the look on players faces when they’re facing down a pack of Kobolds that can cause 11 points of damage with one hit. Smile and laugh.

For an added laugh, have the encounter in the dark, where the Kobold’s Darkvision gives them a big advantage. When PCs fight, they almost always set down the lantern. Have a Kobold kick it over. PCs also drop their packs in a fight. Have a few Kobolds steal the packs and retreat for even more hilarity. Even if they kill all the Kobolds, they still have to find the thieves that took their stuff.

2) Wild Dogs or Wolves: Dogs and Wolves aren’t monsters, but they’re a fairly common encounter at low level. They don’t have many HP, and they don’t do extraordinary amounts of damage. Wolves are more difficult, but nothing a low level party can’t handle.

Answer: Group Tactics and Trip. Both species are pack animals, and this is how they fight in the wild. Wolves already get Trip, but give it to the dogs too. Add Group Tactics (BAB +1 for everyone with GT fighting the same enemy, up to +3) to Trip and they will pull your PCs to the ground and have their way with them (not like that). Wolf pack tactics are a beautiful thing.

Note: Some party members might have qualms about killing animals. Attack them last, eat them first.

3) Goblins: Goblins are the whipping boy of the D&D world. They pick fights with every race, and almost always lose. Only their prolific breeding keeps them around. Despite this, Goblins have a wicked, crafty intelligence and love traps and ambushes. A good DM uses all of this.

Answer: A Bard. Bards are so versatile, they’re perfect for any trap. Besides a variety of spells that can confuse or disable PCs (Daze, Flare, Sleep, Cause Fear, Simple Illusions, etc) they have the excellent Inspire Courage song. There’s no set amount of creatures this can affect. It doesn’t matter if they are 5 or 50, as long as they can hear the singer, they get a +1 to saves, attacks, and damage. This counts for missile weapons too. As with the Kobolds, you can have them fight in the dark, though I prefer missile attacks from concealment like trees or bushes. Add some wolf riders to keep the PCs off the missilers, and you have a killer encounter.

One tip, have all the goblins sing, and dress the Bard the same as the others. This way, the PCs can’t target the Bard specifically.

Apparently Jareth the Goblin King has some Bard levels.

4) Zombies. Everyone loves fighting Zombies. They have a good amount of hit points and damage resistance, but they’re slow and have a poor BAB. Zombies can be trouble for a party without a Cleric, but a Turn Undead ability usually takes care of them.

Answer: Water. I never understood the Slam or Weapon attacks for a zombie. I’ve seen a lot of zombie movies and the attack is always the same: grab and bite. A variation of this would be “grab and drown.”

The undead don’t need to breathe, but PCs do. Have the zombies pull them to a watery doom. Use enough water to drown a person, but not so much that the zombies can’t reach the PCs from the water’s bottom. A shallow pond or swamp works well.

From a cinematic POV, imagine swimming across a darkened lake, only to have corpse-like hands grab you from beneath and pull you under. Scary stuff, right?

As for using Turn Undead, it’s up to the DM. Do you have to see the creatures to turn them, and can you do so without being able to speak? A good grapple might keep a PC from reaching their holy symbol too. We may be 70% water, but it’s better on the inside than out. 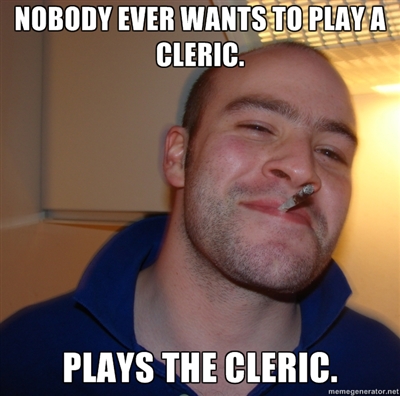 5) Lizardfolk. I am partial to lizardfolk, probably because I’ve been playing one as a PC for the past 3 years (maybe 4). Lizzies are tough, but their lack of tactics in the wild limit the challenge toward PCs. From the D&D wiki: Lizardfolk fight as unorganized individuals. They prefer frontal assaults and massed rushes, sometimes trying to force foes into the water, where the lizardfolk have an advantage.

The obvious answer would be to give more sophisticated tactics (like the zombie drowning scenario from above), but I drew from real-world culture for a different solution.

Answer: Poisoned Weapons. Lizardfolk are swamp dwellers and there are plenty of poisonous animals/plants in the swamp. There’s no reason why they can’t harvest and use poisons. Human cultures have been doing it for thousands of years.

Lizardfolk could put the poison on javelins or darts, or even (and this would be pretty awesome) their claws. Lizardfolk get the very awesome claw, claw, bite multi-attack. If it’s a poison they have natural immunity too (and I imagine there to be several poisons like this) they can dip their claws in the swampy goodness. Given the many different types of poisons, the possibilities are endless. Personally, I would use paralyzing or strength-sapping poison and then have the lizardfolk drown them in the swamp or eat them alive. I’m a twisted bastard.

So there you go, five scrub monsters turned into PC killers. Use with caution, challenging a party is fun, causing a Total Party Kill is not.

Like my posts? Follow my website or “Like” my facebook fan page and/or follow me on Twitter. I also suggest picking up my latest novel The Watchmage of Old New York. Set in 1855 Manhattan, it’s a blend of vivid history, in-depth magic, gumshoe mystery and fairy-tale fantasy. It’s based on the original serial at Jukepop Serials, where it remains one of the most popular serials on JukePop OF ALL TIME!

You can also purchase my debut novel, Song of Simon, at any online bookstore or a real one (they both exist). Song of Simon currently has a 4.8/5.0 rating on Amazon, so people seem to like it.