Jeers: Back and Neck pain. Please make this stop. Just pull out my spine and stick a tension rod in there.

Cheers: Geek night on Saturday. Finished an rpg story arc with my friends (we’re playing a superhero RPG). Leveled up. Ate pizza and drank beer. Ended the night with a spirited game of Risk: Legacy. Discovered that falling asleep drunk means that I won’t toss and turn with back pain…still a bad idea.

Cheers: Tailgating at the Jets game. Woke up at 7. Got there with my friends. Was drinking by 10. Ate way too much. Had a great time. I love my friends and love tailgating even more.

Cheers/Jeers: The Jets game. 90 degree heat and direct sunlight. I was wearing my hardhat and some facepaint, so it was kinda torturous. Especially since all I had to drink so far was cawfee and beer. I think I drank 4 waters and 2 gatorades during the game…I don’t do well in the heat.

But the game was great, and the Jets won! By a lot! Against the Dolphins (to longtime fans like me, the Dolphins are our traditional rival, not the Patriots)! We had great seats (end zone 100 level). Two of my friends that went had never been to an NFL game before, and they both enjoyed it.

As a side note, no one booed the kneeling players, and a good chunk of the crowd kneeled as well. Take that as you wish.

I hope that you enjoyed this blatant ripoff of TV Guide’s Cheers and Jeers section…back when people used to read TV Guide.

If you get this joke, we can be pals.

Yesterday my friend wrote on facebook “Brandon Marshall just replaced the Butt Fumble as the Jetsiest play of all time.” Nothing will replace the Butt Fumble, but it was close.

I was at the game of course. I ate too much, drank too much, and wore a lot of facepaint (and a hard hat). That’s what I do, i’m weird.
It was hard to watch. Without Decker or Ivory, the offense looked terrible. I have faith in Fitzy, but when you lose 2 of your 3 main weapons, you can’t do anything.

Brandon Marshall has over 10,000 yards in his career. He’s an amazing football player, but man, that lateral…come on, man! It’s like I said before: I never get tired of watching the Jets because they find new and interesting ways to lose.

Not that I want them to lose, I just got used to it. Being a Jets fan teaches you humility.

But if there was a game to lose, it was this one. It was out of conference, against a team that most people predicted to be better than us. It was a short week for us because of MNF, and teams usually play worse following MNF. We beat the Colts on the road, so this was like a free loss. It’s a good sign that we shut them out in the second half, and we had a few chances to tie it in the 4th quarter. We just didn’t have the weapons to make it happen.

It doesn’t matter. Sunday in London is the game to win. Hopefully Decker and Ivory will be back. Losing to your arch-rival in front of a different country would be humiliating.

My Brit friends: I’m not saying you should do this, but if you see anyone wearing a Miami Dolphins jersey this week…dolphins love getting fish thrown at them. Chips too.

Aim for between the numbers.

Remember last year when I said “I love the Jets because they find new and exciting ways to lose”? Well, this time they found a way to win.

Starting Quarterback and albatross Geno Smith got into a fight with a backup linebacker, who cold cocked him and broke his jaw in two places. Geno’s out for 6-10 weeks. Ryan Fitzpatrick is now the starter. 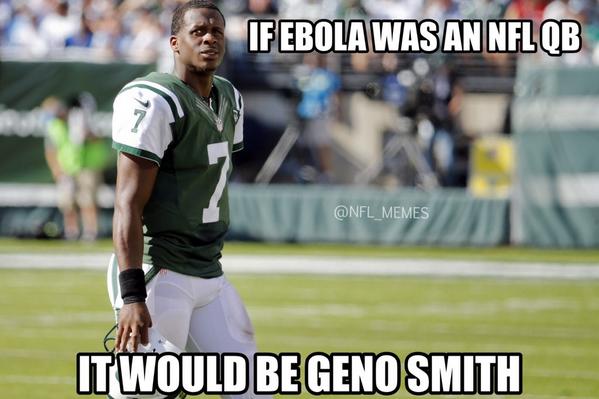 This is awful for Geno, but probably the best thing for the Jets.

Geno has tried and failed. He isn’t going to get any better. Neither is Fitz, but at least he’s at a level where he can manage the game. Fitz is solid, and that’s all that the Jets need. Manage the game and don’t make mistakes. Geno does neither.

I had a feeling that Fitz was gonna take the starting slot anyway, but this guarantees it.

I went to the Jets-Dolphins game Monday night, where we lost with a minute remaining in the game.

The blurry guy is me. I’m pretty damn die hard.

Aside from the usual cast I go with (this time only my friend Sean) we brought a newcomer, who had never been to a game before. The loss was the perfect introduction into what it’s like to be a Jets fan. They make you dream, and then they crush those dreams in a barrage of blocked punts and butt fumbles.

I’ve said it before, but it deserves repeating: The Jets never disappoint because they find NEW AND INTERESTING WAYS TO LOSE!!

What it’s like to be a Jets Fan: Week by Week

Pre-season: “All right! This is our year. Our defense is strong, and Geno’s gonna develop into the QB we know he can be. J-E-T-S JETS! JETS! JETS!

Week 1: Did you see that? We destroyed the Raiders. They didn’t stand a chance. That touchdown at the end meant nothing. J-E-T-S JETS! JETS! JETS!

Week 2: What the hell? We totally got screwed out of that win! That was ours! It’s ok though, it’s only one loss. J-E-T-S JETS! JETS! JETS!

Week 3: Ok, that was pretty embarrassing, but if we didn’t spot the Bears those 14 points, we would’ve won. Once we stop making stupid mistakes, we’ll start winning. J-E-T-S JETS! JETS! JETS!

Week 13: You know what? That’s ok. The Dolphins helped us. We’re gonna get a great draft pick next year, and that’ll be our year! J-E-T-S JETS! JETS! JETS!

Believing in the Jets is like Charlie Brown believing that Lucy is gonna let him kick that football. It’s never gonna happen, but that doesn’t stop you from trying.

I freakin’ love the Jets.

*weeps into slice of pizza*

Like my posts? Follow my website or “Like” my facebook fan page and/or follow me on Twitter. You can also purchase my debut novel, Song of Simon, at any online bookstore or a real one (they both exist). Song of Simon currently has a 4.8/5.0 rating on Amazon, so it’s pretty damn good. If you’re looking for something FREE, you can read my serial (soon to be an expanded series of novels) The Watchmage of Old New York. Though it ended in February, it remains one of the most popular serials on JukePop OF ALL TIME!

I’d like to thank the New York Jets for showing me new and exciting ways to lose a game. Thus is the life we lead as Jets fans.

I’ve seen some awful plays: The fake spike, the butt fumble, the 80s, but I’ve never seen a touchdown called back for a time out that wasn’t taken.

I’m not saying that this one play cost the Jets the game. They couldn’t run on the Pack, they couldn’t get a pass rush in the second half, their best receiver pulled a hammy, and one of their best defensive players got ejected. It’s the uniqueness of the play that catches my attention.

A fan and team expects a certain number of bad calls in a game. The goal is to overcome them, and that’s what the Jets failed to do. But come on man!

I swear, the Jets are the Cubs of football.

These memes make me sad

My love for the Jets is unconditional, even when they pick up a guy like Michael Vick.  I do not like Michael Vick (Ron Mexico), but I also believe in second chances.  His conviction came 7 years ago, and he served 3 years in jail.  He paid his debt.  There’s no need to continue to punish him.  He’s shown some impressive personal growth since his return, the best example being the Riley Cooper incident from last year. I don’t have a problem with him playing for my team.  If a person cannot receive redemption, then society has failed.

From a football perspective, it’s a great move.  There’s no other quarterback out there that would be a better mentor to Geno Smith.  Vick is the archetype that the Jets want Geno to be.  Here’s hoping he can get him there.

Soooo, the Jets are looking to trade Revis.  A-Rod, Granderson and Texiera are out for the Yanks.  It looks like another frustrating year for Craiggers and his teams.

I’m ok with the Jets dealing Revis, but if they don’t get at least a 1st and 3rd round pick for him, they are getting ripped off.  He is the best cornerback in a pass-heavy NFL, he’s like a freakin unicorn!  Cromartie is a downgrade from Revis, but he is still enough of a shutdown corner that it won’t affect the Jets too much.

What the Jets need is (if they are serious about a “ground and pound” attack) a franchise running back.  Shonn Greene is a good back, but not good enough to star in a run-heavy offense.  They need someone with comparable size (230 pounds) but with more explosive speed.  Sanchez is most effective (some might say “only effective”) off of the run-action pass.  No running game, and Sanchez will be fumbling into asses all season long.

Can I asssss you a question?

The Jets could also use a good WR and a solid RG and RT.  The lack of athletic talent on the offense right now is just sad.  A pass rushing OLB would be nice too, to take some of the pressure off of losing Revis.

As for the Yanks, you can only play with an old team for so long before it bites you in the ass.  Let’s hope that this next gen of players has a Jeter hiding amongst the Kevin Maas’es

It stopped snowing, so it’s time for me to clean off my car.  Snoochie Boochies, my friends.

Also I am not particularly religious, I identify very strongly with my Jewish heritage.  I am very proud of our accomplishments and simply the fact that I can say “I belong to a People that have existed for 3500 years.”  Not many ethnicities can say that.

Of course, those of you who have read my writing (hopefully all of you) can see the influence there.  I recently wrote a short story (still unpublished) called “The Kid and the Casserole” about a jewish man and his shiksa goddess.  He is put in a position where he has to defend his ethnicity against the onslaught of “Whiteness” into his kitchen.  Looking at it now, it might need some revision, but still . . . casseroles and hot shiksas.

I do not have a menorah, and it is Hanukah.  I was hoping to go out and get one today, but I got bogged down with napping (I stayed over at Valerie’s last night and didn’t get much sleep . . . giggity).  I know that most of my family doesn’t care, but I care, and I am disappointed in myself.